Delta Drone group is a major player in the field of civilian drones for professional use. The group designs and commercializes a range of
end-to-end professional solutions dedicated to security and logistics sectors.

These professional solutions are sold and/or operated as a service by trained professionals.

Our solution offer is global as it includes all the associated services and personalized support by Delta Drone experts: regulatory proceedings, operators training, provision of personnel, etc. 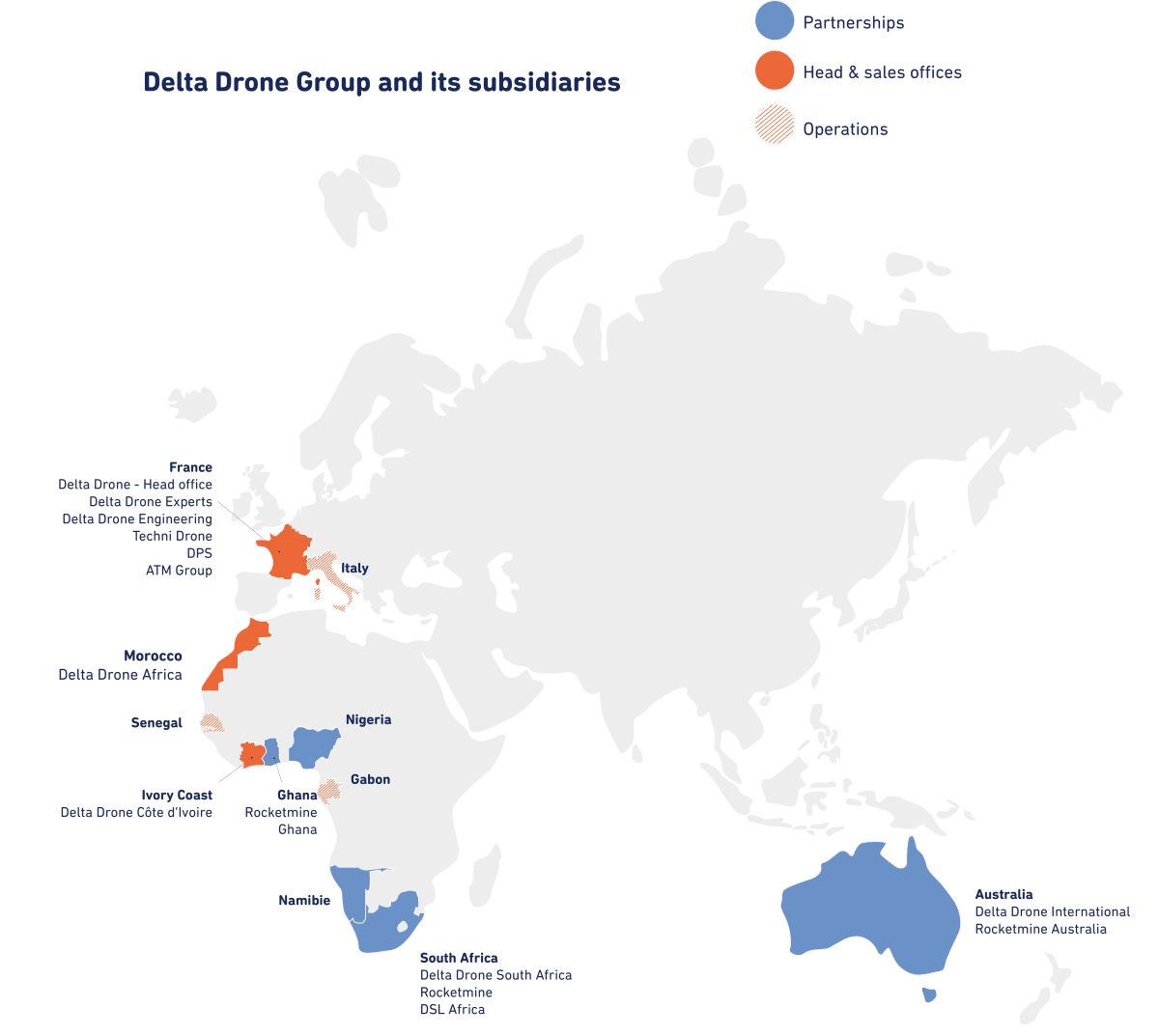 A graduate of IEP Paris, Christian VIGUIÉ worked as a financial analyst before creating several companies in the field of financial information. He also served as CEO of the Unilog Group from 1998 to 2006, where he was responsible for relationships with the financial community. A member of the French Society of Financial Analysts, Christian VIGUIÉ serves as a professor at the Financial Analysis Training Center.

Graduated from the University Erlangen-Nürnberg, Germany, Nicole ANSCHUTZ holds an Executive Master of Marketing, Communication and Digital Strategy at HEC, Paris. She has a wealth of experience in marketing and communication within international IT services companies. Previously she held various positions at Unilog, Logica, CGI and Devoteam, heading brand creation, marketing campaigns and change management projects and was involved in Cloud, Business Intelligence and Cybersecurity initiatives. Since 2021, Nicole ANSCHUTZ has been Director of Communications and Brand for CBRE Europe, a leader player in the corporate real estate business.

A graduate of the Institut d’Etudes Politiques de Paris, holding a Master’s degree in Economics from Paris Panthéon Sorbonne and a former student of the Ecole Normale Supérieure, Jacques RIVOAL began his career in sales at Renault SA. He then successively held various positions: Marketing Manager, Financial Controller, Sales Manager, Director of a distribution subsidiary, Regional Director, Sales and Network Director France, and finally General Manager of Renault-Nissan in Germany.
In March 2009, he became Market Director Europe for the “G4” (UK, Spain, Germany and Italy). He then joined Volkswagen Group France on June 1st, 2010 to become Director of the Volkswagen brand in France.
Jacques RIVOAL was appointed Chairman and CEO of Volkswagen Group France as of January 2, 2013 until May 2018. He is currently Chairman of the Organising Committee for the 2023 Rugby World Cup which will take place in France.

A graduate of IPAG Business School and holder of a Master’s degree in Economics, Loïc POIRIER is an expert in General Management with extensive experience in all aspects of international management. CEO of ARCHOS for 11 years and President of LOGIC INSTRUMENT for 5 years, Loïc POIRIER has acquired a solid experience in the high-tech and electronics industries. During his career, he successively held the positions of Financial Controller at INTERPUBLIC – INITIATIVE MEDIA, SEAGRAM – TROPICANA EUROPE and PACKARD BELL NEC, then Vice President Finance & Operations at NEC USA before becoming Chief Financial Officer at Consodata Groupe and then at Faurecia, to then become CEO of Polardem, DEXTRAIN and Medical Devices Venture. With an international outlook, he has worked abroad for more than 10 years in the USA, the UK, China, the Netherlands, and Malaysia. He has also completed more than 10 fundraisings in the EMEA region (Europe, Middle East and Africa) for more than 230M€ while managing various balance sheets and financial statements for amounts ranging from 50M€ to 1.4B€.

After early experience abroad in human resource management and recruitment for the MERIEUX Foundation in Lyon, Sandra joined the Marketing department at ADECCO Group. She went on to become Marketing Manager in Nantes within the AIRBUS Group, as part of a business diversification project team for Aerospace Development.
She then worked for a management training firm for three years and then resumed her studies at Université Lyon 1, where she earned a degree in Management and Human Resources. Meanwhile, she is responsible for developing a new training program for a French Purchasing Center (PME Centrale). After her audit and consulting work, ten national framework agreements could be signed. Sandra joined Delta Drone in February 2014 as EFD Training Manager and then as Group HR Manager in 2015, to evolve in 2018 into a position of Group Human Resources and Internal Communication Director.

Nicolas Clerc has an Advanced Degree in Accounting and Management and boasts 20 years of experience within accounting and audit firms. After working within several national and international firms, he became audit manager within a firm of about 60 people in the Auvergne-Rhône-Alpes region.

He joined the Delta Drone group in September 2017 as Group Administrative and Finance Director.

Luc Frappat obtained a Master’s degree in Internal Security Law and worked for 25 years in the French National Police as an officer and then as a commissioner.

He has acquired a solid experience in security in his rich and diversified career in the fields of judicial police, intelligence and public order. He is familiar with the security of major events, and was notably Deputy Director of Security for the EURO 2016 football tournament in Saint-Etienne, and took part in the security of many major events, such as the “Fête des Lumières” in Lyon in 2017 and in 2018.

Luc Frappat has also carried out numerous security audits for companies, and is also a trainer for the TFP APS (a Prevention and Security Agent certification) in the fields of conflict management, the fight against terrorism, as well as professional intervention techniques in stadiums and sports arenas. In 2022, he joined Delta Drone to share his experience with the private sector.

A graduate of the Hautes Etudes Commerciales du Nord (EDHEC Business School), Bruno Bobillon began his career in an auditing firm (In Extenso today) from 1994 to 1997. He then became Secretary General of Agénord Sécurité until 2005 before creating his own structures in 2006, which he has been managing since then.