The surveillance drone is nowadays an essential technological system for ensuring the safety of goods and people in many situations. Its speed of deployment and its precise observation make the drone a decisive operational asset during surveillance missions.

By providing high-performance aerial vision, both day and night, thanks to the high-definition and infrared sensors generally on board, the drone makes it possible to film in real time what the human eye cannot easily perceive: detection of individuals or vehicles several kilometres away, optical zoom of at least X20 on suspicious activity, night-time detection using a thermal camera, or instantaneous and complete view of a site spread over several hectares.

The surveillance drone is thus an essential complement to any security plan, whether it is to protect sensitive sites, industrial infrastructures or even to guarantee the security of open-air events bringing together thousands of people.

What challenges does a surveillance drone meet?

Thanks to its versatility of use and its operational performance, the surveillance drone meets many security and safety challenges by allowing:

Connected to the security centre or to the remote monitoring centre, the drone acts as a mobile surveillance camera and complements the security equipment. In practice, the supervision is carried out by a permanent return of stabilized, high quality and recorded video flow.

Using the latest technological advances, drone surveillance is now used in a variety of ways, with systems adapted to different operational needs:

Thus, in a few minutes, the surveillance drone makes it possible, from a distance of hundred metres or several kilometres, to accurately assess a situation, measure its seriousness, and ultimately adapt the response on the field.

The benefits of drone surveillance

While video surveillance is an essential component of any security system, the fixed positioning of sensors (optical and thermal cameras) at the periphery or at strategic locations often provides incomplete coverage, leaving gaps in the monitoring.

The use of a drone, such as a “flying camera”, makes it possible to overcome these difficulties. Whether automatic or tethered, the use of a surveillance drone is crucial to:

As a fast and mobile system, by nature difficult to detect, the surveillance drone is also much more difficult to neutralise than a conventional video protection system. It is a real dissuasive asset for security.

What are the key features of surveillance drones that provide operational added value?

By saving time in the implementation of the response to an incident as well as providing real agility for the operational teams on the ground, the surveillance drone is becoming an indispensable equipment. 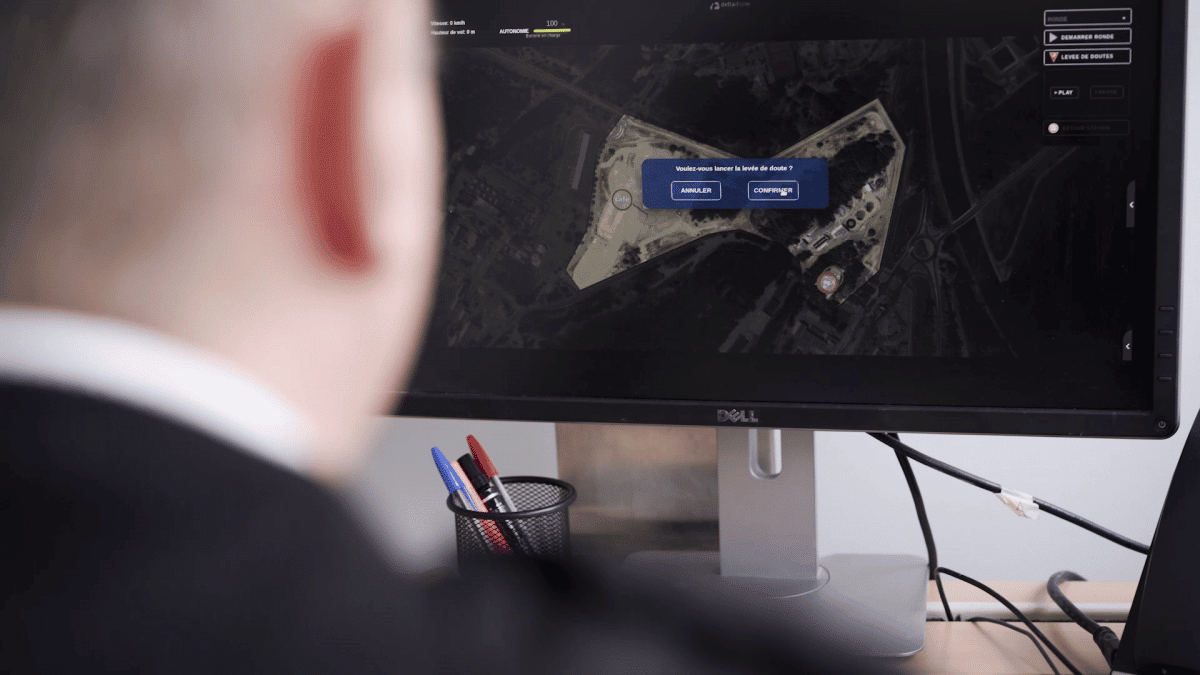 What sectors of activity are concerned by drone surveillance?

The use of a surveillance drone is crucial in a wide range of circumstances, both for the benefit of private operators and public organisations.
The fields of application include, among others

It should be noted that the use of drones by the security forces is governed in France by the Security Laws and requires prior authorisation from authorities.

Similarly, the use of a surveillance drone for private security purposes is subject to strict national and European regulations, which apply to operators and require various procedures for the operation of the systems (declaration and authorisation from the authorities).

What is the role of professional drone in the surveillance system?

These are all points that a surveillance drone is specifically intended to reinforce and complement. By filming at a height of several metres, while maintaining a safe distance thanks to the performance of its sensors, the drone is indeed at the heart of the action.

Interfaced with the main existing VMS (Video Management System) softwares, the drone communicates the images directly to the place of decision: security centre or even tablet if the agent is in a vehicle, and these can be recorded within the system for later analysis.

By providing the security officer with enhanced observation capabilities, both day and night, the drone allows accurate assessment of threats or severity of an incident, without being exposed. It enables the agent to take appropriate action, such as sending a patrol to apprehend an intruder or to secure a designated area.

Which drone to choose for surveillance?

The ISS SPOTTER® solutions meet the ambitious objective of changing the world of surveillance by implementing new technologies for operational teams: the surveillance drone, available in automatic or tethered version, that allows security officers to be more effective in their mission.

Equipped with high-performance on-board sensors, that allows high-definition video feedback in real time to the command post during a public event or to the security headquarters for a sensitive site, ISS SPOTTER® drone surveillance systems provide real added value in decision making.

They are a useful extension of the usual security devices, offering a wide and precise aerial view, day and night. Easy to use, they can be operated by trained security officers, including remotely thanks to a very intuitive human machine interface (HMI).

In addition, ISS SPOTTER® solutions can be integrated into existing security systems and interfaced with the main video surveillance software on the market to ensure complementarity and efficiency.

Particularly suitable for the surveillance of industrial or sensitive sites, ISS SPOTTER® Automatic is a drone-in-a-box surveillance solution that enhances the security of a site 24/7. Fully automated, the drone carries out pre-programmed 40-minute rounds over areas of up to 300 hectares, taking off from its docking station which provides it with the necessary recharge.

It is always under the supervision of the operator, who can run the necessary checks on demand with a simple click on the interactive map. The agent can also easily direct the drone’s camera, which is accessible in the VMS mosaic, using a simple joystick.

This patented and particularly innovative system allow to:

Deployable on demand and operable from its supervision case or remotely, the tethered ISS SPOTTER® drone surveillance system can be used to punctually reinforce the security of an outdoor event or to react in a crisis management context.

Connected by cable to a wired system providing power and secure data transmission, the drone provides continuous monitoring up to 80 metres high. Offering a complementary point of view to the field security teams, it significantly reinforces the security management plan of an event. The ISS SPOTTER® solution is part of the private security services offered by Delta Drone’s subsidiary, ATM Group Sécurité.

Depending on your operational needs, ISS SPOTTER’s automatic surveillance drone and tethered drone solutions can be used to reinforce security systems and complement usual human resources.