ISS SPOTTER® Automatic,
the autonomous surveillance drone in a box

For optimal security when facing an emerging threat, ISS SPOTTER® Automatic provides an innovative, intuitive, and ergonomic solution that can be easily integrated into your existing surveillance system. Particularly suited to securing industrial and sensitive sites, this automated drone-in-a-box solution helps the security officers to detect intrusions and other incidents 24/7, while protecting facilities and staff.

With its 3 modular operating modes (Click&Go, automatic patrol and detection), this autonomous drone offers a precise aerial viewpoint to quickly assess the threat and adapt the intervention. Simple to use and easy to handle, it will assist the security agent in all circumstances.

ISS SPOTTER® Automatic allows you to quickly detect incidents and threats on your site and react accordingly.

A fully protected solution: data encryption and AES 256 links, recording of video streams directly in the security centre and on-board management of degraded modes in the drone.

A wide-angle view that complements surveillance cameras, coupled with a high-powered zoom.

ISS SPOTTER® Automatic integrates with your existing security system. It can work as a stand-alone system, but also in cooperation with a Video Management System (supervisor) or by being fully integrated into a hypervisor.

Operation of the drone in a box

Very fast and stable, the ISS SPOTTER® Automatic drone can fly 1200m in less than 2 minutes (maximum speed of 80km/h). Capable of flying autonomously for 40 minutes in motion as well as in hovering flight, it recharges its battery quickly by positioning itself on its docking station. Its 3-axis stabilised gimbal houses high precision optical and thermal infrared cameras.

Drone in a box

With a patented centring and recharging system, the docking station protects the automatic surveillance drone and recharges its battery. 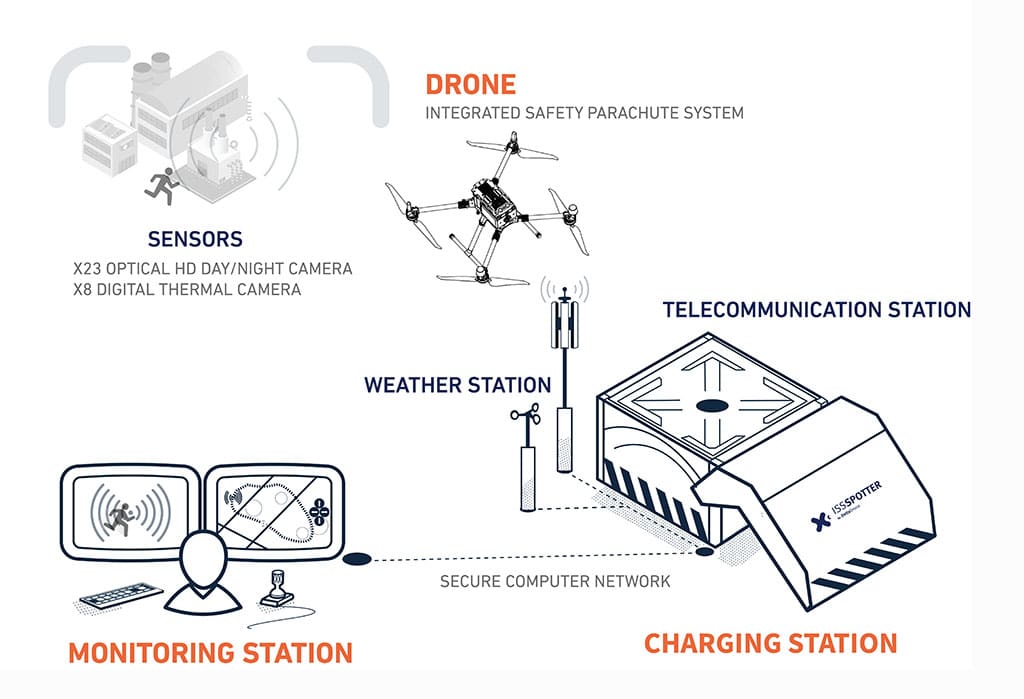 Automatic precision take-off and landing; Full automatic check-up before each take off; System initialization and take-off in less than 45 seconds.

With its optical sensor designed to capture the visible spectrum (RGB), ISS SPOTTER® Automatic has a high-definition on-board camera (4K – Full HD) filming at 30 frames / second and a powerful zoom. A thermal infrared camera allows this surveillance drone to be fully equipped.

Very fast and stable, the ISS SPOTTER® Automatic drone can fly 1200m in less than 2 minutes (maximum speed of 80km/h). Capable of flying autonomously for 40 minutes in motion as well as in hovering flight, it recharges its battery quickly by positioning itself on its docking station. Its 3-axis stabilised gimbal houses high precision optical and thermal infrared cameras.

Drone in a box

With a patented centring and recharging system, the docking station protects the automatic surveillance drone and recharges its battery.

Automatic precision take-off and landing; Full automatic check-up before each take off; System initialization and take-off in less than 45 seconds.

With its optical sensor designed to capture the visible spectrum (RGB), ISS SPOTTER® Automatic has a high-definition on-board camera (4K – Full HD) filming at 30 frames / second and a powerful zoom. A thermal infrared camera allows this surveillance drone to be fully equipped. 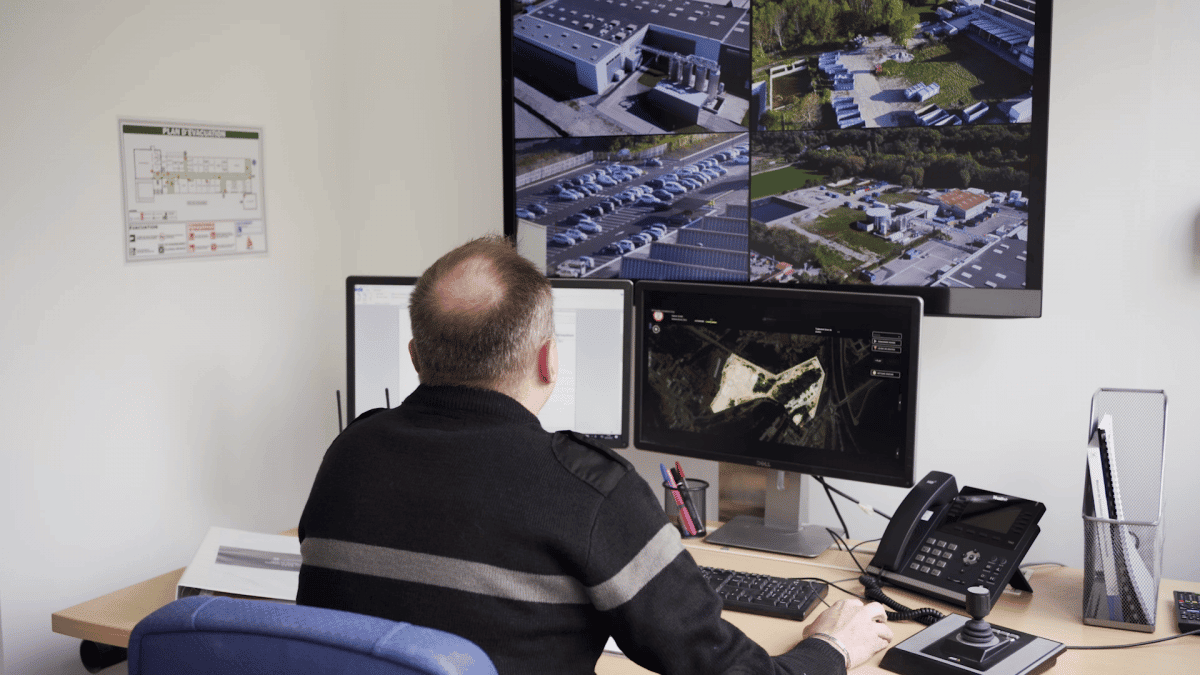 ISS SPOTTER® Automatic’s proprietary Human Machine Interface (HMI) links the ground station, the UAV, the detection sensors, and the supervisor. Simple to use and inspired by the ergonomics of security software, it requires only a simple training for the operator. It is able to communicate with the various security systems present on the site thanks to its integration compatible with most supervisors on the market. Developed in web mode, it can be used remotely (computer, tablet, or smartphone). 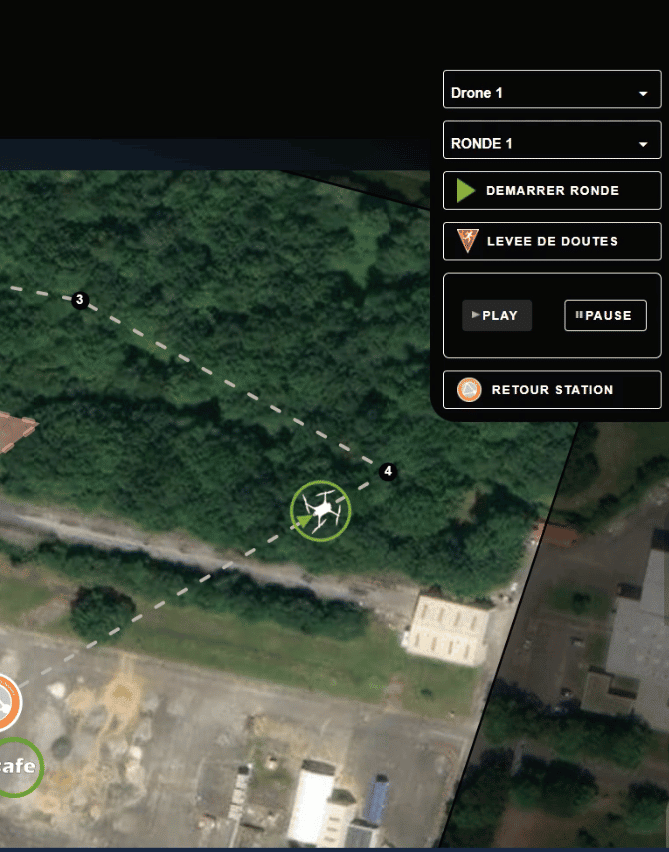 ISS SPOTTER® Automatic gives the operator the possibility to launch pre-programmed rounds following a defined route. It is possible to program “no fly zones” that the drone will not fly over, but also to create unlimited missions with different round profiles (day, night, weekend, etc.). 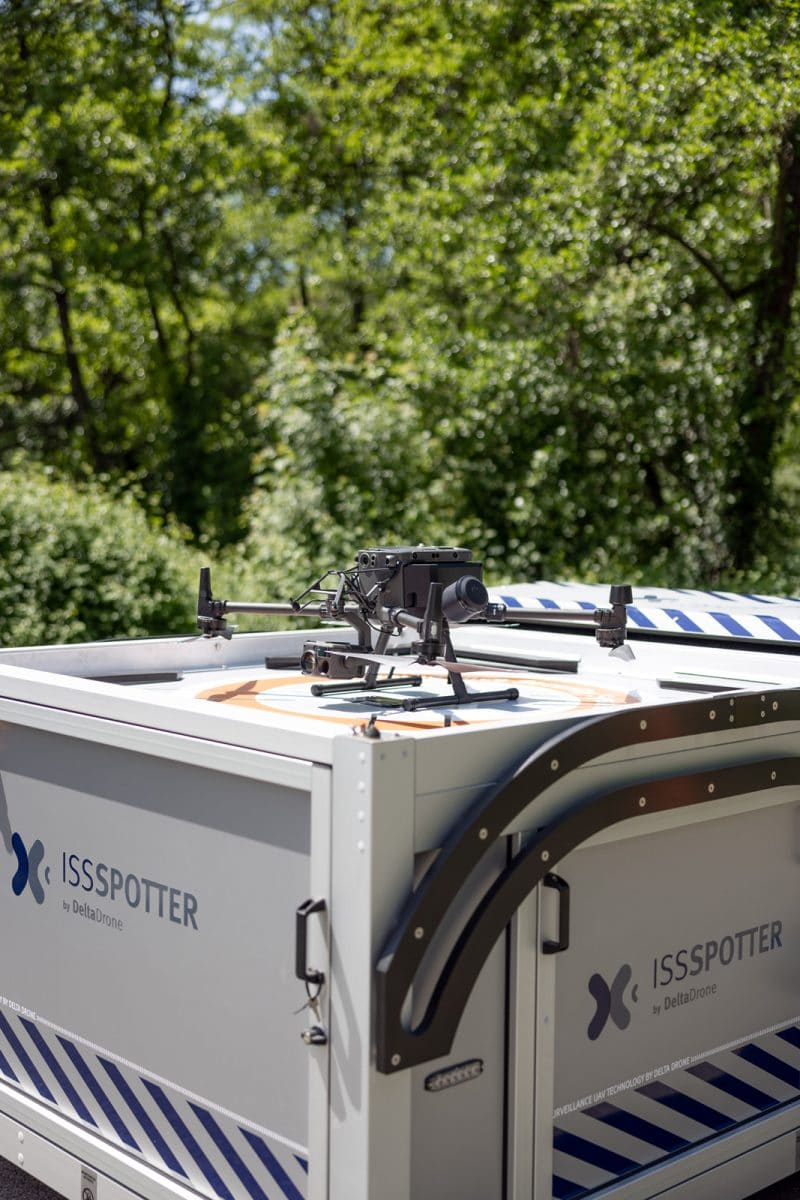 Suspicious activity, intrusion? With one click of the security officer on the interface map, ISS SPOTTER® Automatic deploys quickly from its base to the selected location to characterise the threat. 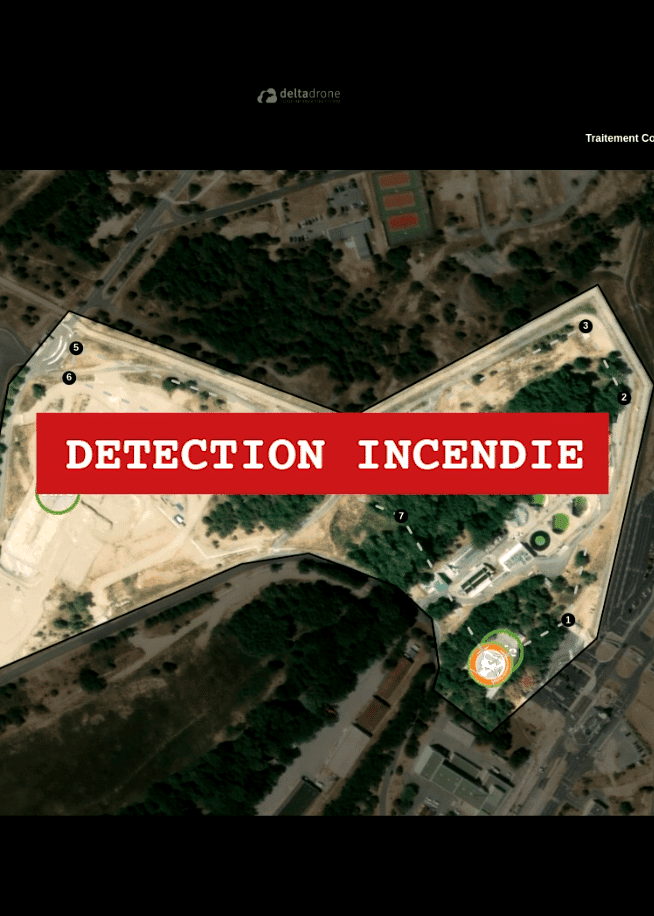 The “alarm detection” flight mode allows the drone to be sent directly to a point of interest after an alarm has been triggered. This flight mode is available while the drone is in its docking station waiting, or during a flight in automated round. In both cases, the most direct flight path is automatically calculated, considering the limits of the flight area and permanent or temporary no-fly zones within the geofence.

The detection of alarms is defined beforehand when settings are done for the site.

How to monitor an industrial site? 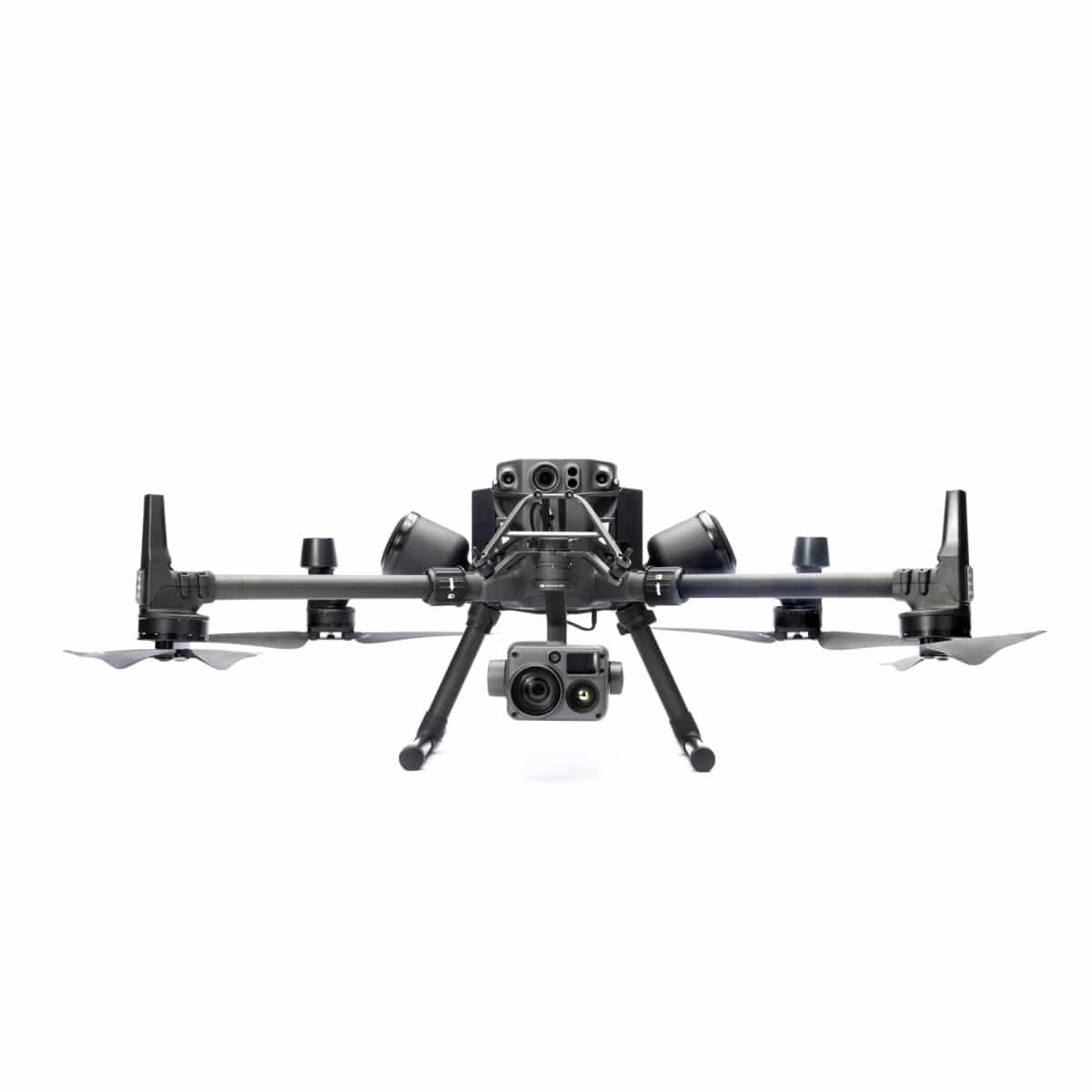 Why choose an autonomous drone like ISS SPOTTER® Automatic?

Choosing an autonomous drone allows you to take full advantage of the benefits of the drone as a complementary security device, by offering high-precision aerial vision and without mobilising a pilot. Thus, it is not necessary to train teams in professional drone piloting, which represents a financial and operational gain for companies. A simple training course is given to security officer to quickly master the system’s software interface.

The ISS SPOTTER® solution integrates easily with leading VMS (Genetec and Milestone) and allows you to remotely control the drone’s trajectories from your usual security environment.

In addition, autonomous drones provide a global aerial view of the site to be protected, including inaccessible or restricted areas, and protect personnel from possible physical risks (falls, attacks, etc.).

What is an autonomous/automatic drone?

An autonomous drone is an aircraft that is remotely piloted under the control of a human operator. In the case of the ISS SPOTTER® Automatic solution, it is a professional drone capable of automated flight and whose various flight modes are controlled by the security officer from the security centre.

How does an autonomous drone work?

Programmed by humans to act in situations frequently encountered in their monitoring missions, automatic drones can perform various tasks autonomously (avoiding obstacles or sensitive areas, checking risky situations, returning to automated patrol mode, taking off, landing, etc.). Although the autonomous drone operates without a pilot, the intervention of the security officer from the supervision centre is nevertheless essential to activate and control ISS SPOTTER® Automatic and its various modes. This human factor is key to guarantees the total safety of the automatic drone-in-a-box device

Why do autonomous drone surveillance?

Sensitive sites are exposed to multifactorial risks that can at any time jeopardise their proper functioning and the safety of personnel. These threats affect the company’s activity and the economic consequences are potentially significant.

In addition, the site’s environment can indirectly suffer the consequences of a local incident if it is not neutralised quickly enough. To meet these security needs for sensitive and extensive sites, aerial surveillance by the ISS SPOTTER® autonomous drone complements the human means deployed on the ground. The autonomous drone makes it possible to anticipate almost all the needs related to the security of large areas with reduced timeframes for clearing up doubts.

How to do autonomous drone surveillance?

ISS SPOTTER® Automatic’s autonomy of around 40 minutes enables the drone to carry out regular, pre-programmed surveillance rounds, initiated by a simple click of the operator. Its powerful zoom camera is coupled with a thermal infrared camera for better threat detection, day or night. All the video streams captured by the drone’s camera are retransmitted directly into the client’s VMS (Video Management System), which can be consulted from the security centre or remotely via a web page. Thanks to this global and precise angle of view, fully integrated into the existing security system, the security officers can act reactively in accordance with the threats they face.

How does the autonomous surveillance drone work?

ISS SPOTTER® is set-up and connected to the existing security network and the drone acts as a new, fully mobile surveillance camera. The remote operator is alerted to an intrusion by the appearance of a window on his screen and can order the drone to take off with a simple click. Once the drone is on site, the security officer is able to validate or refute the intrusion thanks to the optical and thermal images received directly in the security centre. Once the mission has been completed and the decision to intervene has been taken, the agent orders the drone to return to its docking station with a mouse click. The aircraft makes the return journey and lands on its base in a 100% autonomous manner before automatically loading itself in a secure area until the next mission.

What procedures come along with the ISS SPOTTER® autonomous drone?

Delta Drone has experienced teams that take care of all the steps involved in the deployment of ISS SPOTTER® Automatic: airworthiness study, regulatory study for authorities, site analysis, installation and configuration of the system, training of your personnel and maintenance of the system in operational condition.

What is the range of an autonomous drone?

As an integral part of the security system, the ISS SPOTTER® Automatic solution offers a unique view of the surfaces within the perimeter to be monitored, particularly in places where fixed cameras are limited by their blind spots or vertical masks. Flying at several tens of meters at high speed, it is notably more difficult to neutralize than a fixed camera.

How to comply with the regulations of use applying to an autonomous drone?

To comply with the regulations but also the environment in which the drone is integrated, a menu allows you to configure areas that the drone cannot fly over.

Two types of zones can be defined:

How to carry out automated rounds with the ISS SPOTTER® Automatic drone?

A drop-down list within the interface allows the security officer to select the type of patrol from the pre-programmed flights. The route of the selected patrol is then displayed on the map with its waypoints. When a patrol is selected, a button is used to launch the drone flight. A pop-up confirmation window appears after the first click on this button. If the operator confirms the launch of the round, the drone goes into the flight phase. It arms its engines and takes off immediately to complete the programmed route.